Skip to content
Home
/
2017
/
August
/
10
/
Neuropsychology
/
The Effect of a Missing Septum Pellucidum in the Human Brain
August 10, 2017 by james 1 comment Neuropsychology

An Introduction to Septum Pellucidum

Some babies may grow to display certain unusual behaviours early in childhood. They include difficulty in learning, seizures and vision impairments. After further research, scientists were able to isolate this condition to the absence of the septum pellucidum in the brain.

What is Septum Pellucidum?

The septum pellucidum (or translucent hedge) is a thin, triangular, vertically aligned double membrane that separates the anterior horns of the left and right brain ventricles. From the corpus callosum, it runs down as a sheet to the fornix.

The septum pellucidum is often mistaken for the septal nuclei, but it is important to note the difference. The absence of this matter is responsible for the rare condition, septo-optic dysplasia. While an MRI can reveal a clear diagnosis, its symptoms are common in childhood. According to the National Organization for Rare Disorders (NORD), when an individual is diagnosed with a missing septum pellucidum, it is critical to search for an underlying disorder.

Symptoms of a Missing Septum Pellucidum

The septum pellucidum provides information to the rest of the body about its present status. This information may include whether the body has got enough sleep (or not), food, or if the environment is safe. An absent septum pellucidum may therefore create sensation of hunger even when the individual is not, or tiredness when they have had adequate sleep. It is common for septum pellucidum-deficient individuals to be short and have a high body mass index (BMI). Simply put, they often have a heavier weight than is normal for their height.

Causes of a Missing Septum Pellucidum

Depending on the underlying condition, a missing septum pellucidum may be caused by several factors. In some cases, people are born with a buildup of fluid in the brain (Hydrocephalaus). If this is not corrected early, the fluid may end up dissolving the septum pellucidum. The absence of septum pellucidum can also be congenital; meaning it occurs right from birth.

Prognosis of a Missing Septum Pellucidum

It is critical to note that having a absent septum pellucidum is not a disorder on its own. But when it is part of septo-optic dysplasia, the prognosis will differ based on the presence and seriousness of the associated symptoms.

The prognosis or long-term outlook for individuals affected by a missing septum pellucidum varies with the underlying cause for the disorder. Some common symptoms associated with the condition can be treated. For instance, medicines can be used to relieve seizures or treat changes in behaviour.

Individuals with heavy BMI and small statures can be administered growth hormones to balance out the disparity. However, certain conditions that result in the absence of a septum pellucidum may have different prognosis. 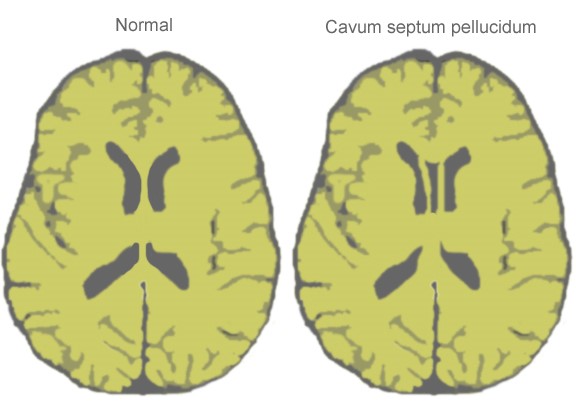 Treatment for a Missing Septum Pellucidum

As mentioned, the absence of a septum pellucidum is not categorically a disease, rather it is often a common characteristic of children who have septo-optic dysplasia. Some treatments are focused on underlying causes such as brain tumour excision, systemic steroids for temporal lobe arteritis, and aspirin for nonarthritic ischemic optic neuropathy.

Can patients with a missing Septum Pellucidum lead a normal life?

Yes, with the right treatment and care, the effects of the condition can be managed. Depending on the underlying cause, it can be significantly reduced to a non-affective state if treated completely. Patient may require regular visits to a physician for check-ups in early childhood, but it does not mean they cannot lead a relatively normal life.

How can one diagnose the problem without waiting to see the symptoms?

Usually, this condition is caused by an agenesis of corpus callosum. The diagnosis method would be to conduct four types of scans, depending on the stage of the individual. An MRI and CT scan is usually performed on children and adults, while a prenatal ultrasound and prenatal MRI scan is carried out pregnant women.

How can parents of children with corpus callosum cope?

Parents with affected children should support their children. They should begin by working with a professional to provide cognitive and behavioural training from early childhood. It is important to perform neuro-physical testing to evaluate the child’s cognitive skills.

Are there any pre-natal activities that can prevent the condition?

Not necessarily. While some corpus callosum defects may be the result of external factors such as diseases that affect the optical parts of the brain, or Herpes simplex in some cases, having a missing septum is usually caused by natural factors, especially in birth. Some children are born with it.

How can affected parents get more help about the condition?

There are international bodies and local organisations that provide more information on how to cope with, and support patients with missing septum pellucidum or septo-optic dysplasia (and associated symptoms). The National Institute for Neurological Disorders and Stroke (NINDS), the Monarch Initiative and the National Organization for Rare Disorders (NORD), are examples of such organisations.

For more information on these FAQs, please visit this site.

Leave a Reply to A WordPress Commenter Cancel reply