Why do some people have trouble sleeping? Everyone experiences the occasional rocky night which happens particularly when you are under a lot of stress. However, if it happens often, you might need to see a doctor to figure out what’s going on. Sleep disorder, also known as somnipathy can have major effects on a wide range of neurological complaints including headaches and epilepsy, and can equally affect vital health issues such as blood pressure. Certain sleep related disorders can be dangerous for patients and their bed partners, while also being useful clues in diagnosing some neurodegenerative diseases. Sleep disturbance or daytime sleepiness result from a wide range of conditions including breathing abnormalities like sleep apnea or neurological conditions such as Restless Legs Syndrome, Narcolepsy, Circadian Rhythm Disorders (body clock abnormalities), in addition to parasomnia issues sleep walking, sleep talking and dream sleep disorders, all of which disturb sleep. Some people with sleep disorders are unaware of it and have struggled with sleep disorders for so long that it seems almost normal to them. Tracking the symptoms is necessary in order to understand your peculiar problem and where necessary, healthier changes can be carried out to improve sleep behaviour. Specialists who are trained in sleep medicine can also help in identifying the root causes of certain sleep disorders and suggest ways to improve sleep quality. 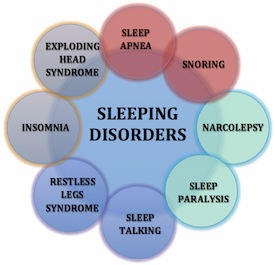 Sleep apnea is an umbrella term containing three different conditions: Central sleep apnea (CSA), Obstructive sleep apnea (OSA) and Complex or Mixed sleep apnea. Sleep apnea may occur in mild amounts during periods of illness and can be expected to stop as soon as the illness is cured (throat infection for example). Long-term or severe sleep apnea however can lead to dangerously low levels of blood oxygen and prompt medical attention should be sought. As much as some people may find snoring annoying, it is a form of obstructive sleep apnea which can deprive an individual of a restful night’s sleep, cause fatigue, grogginess and difficulties with concentration the next day.

This sleep disorder occurs when a person has difficulty falling asleep, difficulty staying asleep or wakes up from sleep too early. Insomnia is caused by a health condition, stress, jet lag, certain medications or coffee. Other sleep disorders or mood disorders like depression and anxiety can also lead to insomnia. In many instances, people experiencing insomnia wake up feeling unrefreshed, and their ability to function during the day is hampered. Many adults may experience insomnia at some point in their lives, but whatever the case, insomnia can be cured. Improving sleep hygiene, revising daytime habits and learning to relax is key to curing most insomnia cases. More serious cases may require the help of sleep specialists, prescription or over the counter pills.

RLS or Restless Legs Syndrome is a sleep disorder that causes a powerful, uncomfortable aching, tingly or creeping sensation in either your legs or arms before falling asleep or when you are lying down. RLS is a common cause of insomnia and sleep disruption. Certain medications, iron deficiency, nerve damage, diabetes or pregnancy are some of the causes of Restless Leg Syndrome. Some RLS patients also have Periodic Limb Movement Disorder, which is an increase in muscle activity during sleep.

Narcolepsy is a sleep disorder characterised by uncontrollable, excessive daytime sleepiness. It is caused by a dysfunction of the brain mechanism that controls sleeping and waking up. Narcolepsy patients may have unexpected “sleep attacks” known as cataplexy right in the middle of talking, driving or working. While there is yet no cure for this sleep disorder, symptoms can be controlled with the help of professionals who will first carry out thorough sleep evaluation, including overnight and daytime testing to monitor sleep patterns.

People with hypersomnia sleep disorder deal with strong feelings of sleepiness during the day and may sleep for extremely long periods at night. During the day, they are irritable and often deal with feelings of tiredness which make them unable to function efficiently at work, or even in social situations. This sleep disorder may be related to others like narcolepsy or sleep apnea, and can be caused by medications or other medical conditions.

Parasomnias are neurological sleep disorders that occur as the brain makes the transition from wakefulness into sleep, from sleep to wakefulness or during a mix of wakefulness and sleep. Parasomnias are often accompanied by mental disorientation and complex behaviours such as sleep walking, night terrors and acting out dreams. Sometimes, people with parasomnias kick around and hit in their sleep.

How Much Sleep Do I Need?

The amount of sleep needed will vary depending on the individual, and on other things as well, including the age. However, adults generally need about 7 to 8 hours of sound sleep per night.

How do I know if I have Sleep Apnea?

Sleep apnea is a potentially life-threatening disorder that can causes involuntary breathing stops during sleep. To know if a person has sleep apnea, look out for such symptoms as pauses in breathing, loud snoring and daytime sleepiness.

What Sorts of Treatments are Available to help with Sleep Disorders?

The first step to treating sleep disorders is to make changes in lifestyle such as improved sleeping habits, better stress management and regular exercise. A CPAP machine may be recommended by your doctor if you have sleep apnea to maintain regular breathing.

Who’s at Risk for Sleep Disorders?

Sleep disorders can happen to anyone. However, people at a higher risk of sleep disorders include middle-aged women (for insomnia), overweight and middle aged men (for sleep apnea) and kids or teens (for sleepwalking)

Can I develop a Sleep Disorder if I’m on Some Prescribed Medication?

All medication, prescribed or otherwise can interfere with your regular sleep patterns or the ability to wake up from sleep. Also, people dealing with conditions such as depression or high blood pressure are at risk of developing a sleep disorder.

Is there anything I can do to Sleep Better on my own?