Humans are such emotional creatures, and many times, our emotions are determined by the particular mood we are in and vice versa. People say they are in a bad mood in certain periods when they feel sad or irritable. In regular people, mood swings do not significantly interrupt everyday life. If you are feeling a little bit down, you can still go to work, see your friends and take care of your family. However, extreme mood swings can completely disrupt a person’s life. The causes of mood imbalances have not been completely discovered. Lasting theories for mood disorders such as Depression for instance, involve chemicals in the brain known as neurotransmitters, which cause an imbalance that leads to depression. Brain structure and functioning may play an important role in the development of mood disorders since results from brain imaging studies how a difference between the brains of people with bipolar disorder and healthy brains. When a person is affected with a mood disorder, his or her general emotional state or mood is disrupted or inconsistent with their current circumstances.

What are Mood Disorders?

The wide range of illnesses under mood disorder include:

Bipolar disorder — a debilitating and dangerous disorder that creates an unexpected shift in a person’s mood and energy levels. People with bipolar disorder usually have some periods of full or partial stability, and alternating periods of extreme sadness (depression) or extreme happiness (mania).

Persistent Depressive Disorder (dysthymia) — diagnosed when a person suffers depression for longer than two years. Dysthymia can hamper normal functioning, even though it is not as debilitating as major depression.

Seasonal Affective Disorder (SAD) — also known as winter blues or winter depression. This form of mood disorder is diagnosed for people who have depressive episodes occurring at least twice in colder months and none at other times of the year for at least two running years. Episodes might come on in the autumn or winter and vanish by spring.

Premenstrual Dysphoric Disorder — mood changes and irritability that occur during the premenstrual phase of a woman’s cycle and go away with the onset of menses. The disorder involves a series of affective, somatic and behavioural symptoms. PDD treatment relies mainly on antidepressants to regulate the brain’s serotonin levels.

Relationship between Depression and Drug Dependence

There is a relationship between alcoholism, substance abuse and depression. A diagnosis combining substance abuse and mood disorder is one of the most serious concerns for psychiatric professionals. Neurotransmitters in the brain’s pleasure centres are activated by cocaine and other stimulants to cause a quick elation that is followed by depression as the pleasure feeling lowers.

In certain cases, what appears to be major depression lifts after the person stays away from alcohol and drugs. Mood disorder patients have a higher chance of having a nicotine addiction, and when they try to quit, become even more depressed. 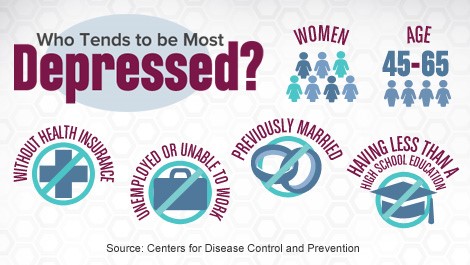 Medications such as antidepressants are generally used to treat major depressive disorders. Bipolar disorder medications can include anticonvulsants, mood stabilizers, antipsychotics and in some cases, lithium. Lithium in addition to valproic acid and carbamazepine are mood stabilizers which can be used to balance certain brain chemicals (neurotransmitters) controlling emotional states and behaviour. Mood stabilizers can be used in the treatment of mania, and prevent the return of the manic and depressive episodes associated with a bipolar disorder.

Mania is constantly elevated, expansive or irritable mood. For mania to be diagnosed as a mood disorder, the individual must have been in this state for at least a week, or hospitalised with symptoms such as sleeplessness, agitation or racing thoughts.

Yes. Depression is a treatable illness. A combination of medication and psychotherapy, in addition to adjunctive treatment such as ECT in some cases, will usually lead to recovery.

Are there physical symptoms that accompany depression?

Some of the symptoms which a depressed individual can show include lack of motivation, decreased energy, headache, constipation, and a lowered pain threshold.

How common is bipolar disorder?

Bipolar disorder occurs in about .5 to 2 percent of the population. Unlike unipolar depression which affects more women than men, bipolar disorder affects men and women equally.

Is it possible for someone with bipolar disorder to be in denial?

Usually, yes. People suffering from mania regard refuse to accept that they are ill, and will likely view any attempts for treatment as ridiculous. They may engage in high-risk behaviours such as taking multiple sex partners, spending a large amount of money, and as the mania progresses, the risk of suicide increases.

Certainly. Successful treatment of mood disorders can prevent or greatly reduce the chance that future manic episodes will occur. It is absolutely essential however, to continue treatment between episodes. It is not recommended to discontinue medication when the person begins to feel better.